Given that I’m born, raised, and live in south Louisiana, I probably qualify for some type of 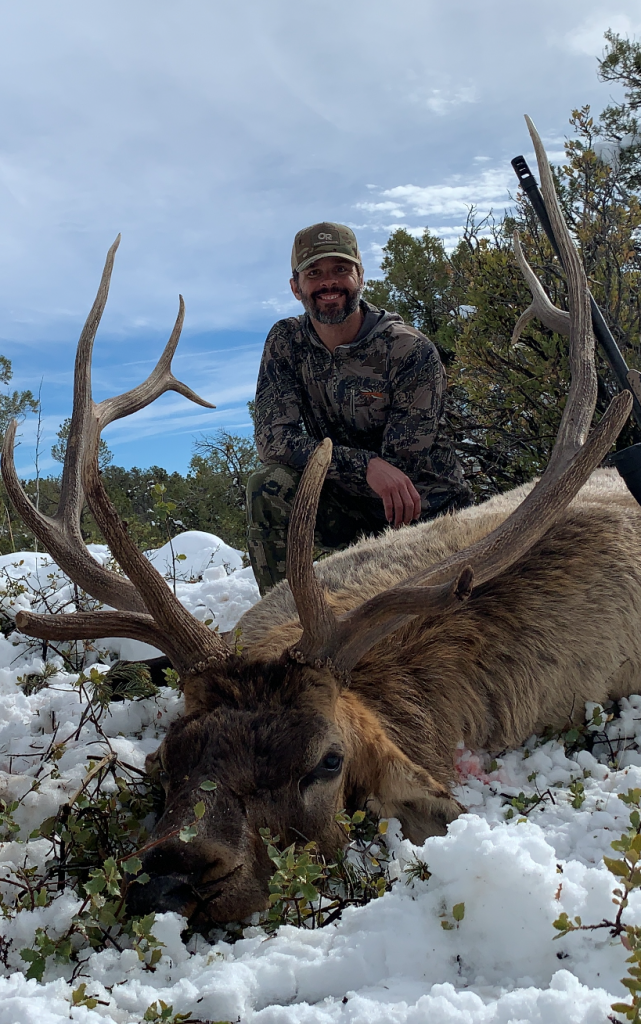 “understatement of the year” award for saying I was slightly out of my element for this hunt. With opening day closing in on us, a winter storm was doing the same. The forecast called for between 1-2 FEET of snow, and 25-35mph sustained winds. What am I supposed to do with that???? Do people hunt in that? Can I drive my truck anywhere in that? What do the animals do in that? Do they hunker down? Do they start migrating to different areas?……..

Before discussing whether or not I was prepared for these conditions, or if I could discover the answers to some of these questions, I guess it’s best to talk about what I WAS prepared for, and how that led to the eventual outcome. Gear had been refined through a few previous elk hunts. Food for 7 days of hunting was dialed in. Physically, I was prepared to go up & down in big country. In the months leading up to the hunt, I read every article, post, thread, etc, and watched every video, I could find related to the hunt. I spoke with everyone I knew that had knowledge of the local area. Satellite imagery and maps were all downloaded. Last thing I felt I needed was a really good paper map.  In my mind, regardless of how technology progresses, a paper map will always play a vital role in the planning & execution of a hunt. I rely heavily on my device to zoom in & out, look at satellite images, navigate, etc. But, paper is still the only way to pull back, take in the lay of the land, see how things are connected, and locate specific terrain features. I couldn’t find what I was looking for off the rack, but did come across Gameplanner’s website. So, I gave Ed a call. He had a lot of questions for me as far as intended use, layers, features, labels, and scale that I wanted to see. Based on my feedback, Ed had a rough draft emailed to me a short time later. It had everything I was looking for, so we went ahead with the order. I finally felt that I was fully ready for the hunt….

And then, what was forecasted actually happened. Pre-hunt plans required some significant reworking. Slowly, over the next few days, the answers to my questions would be revealed. Opening morning found us all very concerned about the ability to drive anywhere. So, we all just walked out from camp in different directions. I made a 7 mile loop, trudged through a lot of snow, saw a few mule deer, some elk tracks, and that was it. Day two had me chomping at the bit to head back to an area where I had glassed a herd of 12 elk, including a nice 6×6, a few days before the opener. Fortunately, my truck was able to handle the conditions, and got me at least a workable distance from the intended location. From there, it took over two hours of walking on snowshoes to get back to my glassing point. After all of that, the hillside that had held such high hopes was barren. As I sat there, the questions started nagging me. Wonder if maybe they’ll be here tomorrow? Were the animals gone from here, and headed to lower elevations?? Did someone else come in and blow them out before the storm??? My drive back to camp that evening had me feeling a little pressure. Could I figure all this stuff out before the hunt was over? 5 days never felt like such a small window! As the truck tires rolled cautiously through all that snow, all the gathered intel and advice I was given rolled over and over in my head.

It is at this point that Game Planner Maps factored heavily into the equation. That night I poured over the map and made a list of all the likely looking areas.

With the level of detail that Ed had included, the chosen area for day three jumped out at me. Looking forward to covering some new ground, I eagerly climbed out of the sleeping bag the next morning. The plan was to head out on to the end of a skinny ridge where I could look over a bowl on one side, and a canyon on the other. It turned out to be a good location to put eyes on a lot of country, but after a few hours, I had turned up nothing with the glass. Slightly disappointed, I decided to head back in the direction of the truck. I had cut a set of bull tracks on the way in, but didn’t take them seriously, figuring there was no way I could track one down. When I can across them on the way out, I decided I’d give them an honest effort, and, at the very least, maybe learn something. For the next hour, I followed his meandering path, found where he had bedded for several hours, and then where he had begun feeding that morning. There was no doubt it was a bull, given the size of his tracks, and the fact that every place he fed under lower-hanging branches had pine needles, knocked down by his antlers, scattered all over the snow. From there, his tracks lined out for a ways, and then began to meander again. I took note that there wasn’t much area left before the small point that I was on dropped off sharply into the canyon. If he was still in the area, something was going to happen soon. The wind was good, so I slowed my pace and studied my surroundings more intently. I hadn’t taken too many more steps when I glanced to my left down a narrow lane, and THERE HE WAS!!! Given the small window, I had to shoot offhand. So, I wrapped up in the sling, went through the routine, and waited for the crosshairs to settle. At the shot, he jumped to his feet, but looked like something wasn’t quite right. We’ve probably all heard the advice of “if they’re still standing, you’re still shooting!” So, I racked another round. It felt like it took forever for the crosshairs to settle this time, thanks to a fresh shot of adrenaline. The second one put him down. Turns out, either bullet would have done the job. Each one took out a shoulder, and transected the vitals from opposite sides.

Fortunately, there was one bar of cell service where he fell. So, I was able to share the moment with my wife & daughters when I walked up to him. I spent a glorious afternoon taking pictures, processing the entire elk, and hanging all the meat bags in the trees. I had gotten half of it out when my buddies showed up at the truck that night. We made one more trip, and had everything back to camp not too long after our regular bedtime. It was an absolutely incredible experience, one that I will remember for the rest of my life. It was cool being out there in a pretty significant snow storm. The mountains were so beautiful after it ended. And, walking up on a big bull elk is a surreal experience that I wish every hunter could experience.

As I sit here writing this, I am so looking forward to what the 2020 season has in store, and what maps I may need to make sure that I’m ready!!